Kimberly Frost is the national bestselling author of the humorous Southern Witch series, which includes Would-Be Witch, Barely Bewitched, and Halfway Hexed. She was the 2010 PEARL award winner for best new paranormal author, and her paranormal romantic suspense "Etherlin" series launched in November 2011 in the multi-author Christmas anthology, Tied With a Bow, followed by the January 2012 release of All That Bleeds (Etherlin Series, Book 1) You can learn more about Kimberly and her books at: http://frostfiction.com/ 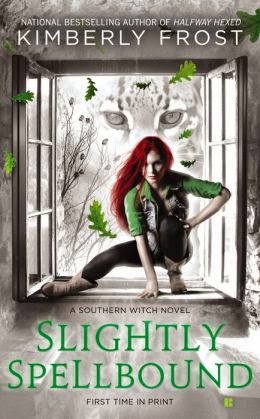 Our Review, by LITERAL ADDICTION's Vivacious Valkyrie - Marta:*Copy Gifted in Exchange for an Honest Review

The fourth magical instalment in the Southern Witch series charting the somewhat chaotic life of Tammy Jo Trask. She's part witch, part Fae and most definitely all Texan and unfortunately right now caught between two very different men. On one side there's her ex husband Zach who will always hold a place in her heart and then there's the sexy Bryn Lyons who she is magically bound to. Two men and one woman , it should be an easy choice right? Trust me in Tammy Jos world nothing is ever as straightforward as it seems!

Tammy Jo's magic is a little complicated as she's such a curious mixture. Her inner witch calls upon her earth powers but her Fae side is getting much harder to control. There's someone spying on her and if that wasn't enough to creep Tammy Jo out something odd is happening to the towns ghosts as they are disappearing ! When Evangeline Rhodes shows up asking Tommy Jo to be her bridesmaid it sets off a chain of events that will lead Tammy Jo on a not so merry dance. There's danger tracking Evangeline and now it looks as if Tammy Jo is right in the middle of it too! Dark magic practices are threatening the safety of Tammy Jo and those she loves and when Evangeline's thoroughly nasty family start playing their evil games it's time for Tammy Jo to come out fighting. She's not going to quietly stand by and watch pure evil take over her town and they had just better step aside. Tammy Jo is a woman on a mission but her inner most turmoil is about to pull her in directions that she just never expected.

I love Tammy Jo! And I love the way this book is written as the reader gets to be inside Tammy Jos head and she has a voice that really lifts the story from the page and straight into my imagination. It's so easy to feel that the reader is right alongside this strongly written heroine and it's an immediate reaction that stayed with me throughout the book. I really liked Tammy Jo, she's full of southern charm and wit. Written as a brave fun loving woman who gets into all sorts of scrapes but she always has time for those who need help. Her interactions with the two men in her life gave me pause though as I really wanted her to make up her mind quickly as triangles are so not my thing but the author gives sound reasons for Tammy Jo's hesitance . Letting go of something so right is hard to do and trusting blindly in something new may not always lead to happiness. Two totally different gorgeous men now there's a dilemma!

It's a fast paced plot with both new characters and those from previous books appearing and I loved Mercutio! Is it essential to read the others first? I'd say no as the author does a pretty good job of explaining things, but it's such a fun series that it would be a shame to miss out. Lots of action to offset the romance aspect of this book but it's the heroine Tammy Jo that truly makes this series work . She's fun and quirky but so full of compassion for everyone. Don't get on the wrong side of her though as this girl will take you down ! As for her men? Well read this book and find out if she's made up her mind and just enjoy the absolute madness that colours Tammy Jo's world!

Posted by LITERAL ADDICTION at 10:05 AM