[ARCHIVE] LITERAL ADDICTION's Review of Dancing on the Grave 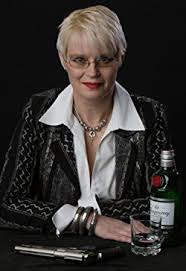 Zoë Sharp was born in Nottinghamshire, but spent most of her formative years living on a catamaran on the northwest coast of England. After a promising start at a private girls' school, she opted out of mainstream education at the age of twelve in favour of correspondence courses at home.
Zoë went through a variety of jobs in her teenage years. In 1988, on the strength of one accepted article and a fascination with cars, she gave up her regular job to become a freelance motoring writer. She quickly picked up on the photography side of things and her photo-journalism took her as far afield as the United States and Japan, as well as Europe, Ireland and the UK. She is now a full-time fiction author and creator of the Charlie Fox series of crime thrillers.
Zoë wrote her first novel when she was fifteen, but success came in 2001 with the publication of KILLER INSTINCT − the first book to feature her ex-Special Forces heroine, Charlotte 'Charlie' Fox. The character evolved after Zoë received death-threat letters in the course of her photo-journalism work.
Later Charlie Fox novels − FIRST DROP and FOURTH DAY − were finalists for the Barry Award for Best British Crime Novel. The Charlie Fox series has also been optioned for TV.
As well as the Charlie Fox novels, Zoë's short stories have been published in anthologies and magazines, and have been shortlisted for the Short Story Dagger by the UK Crime Writers' Association. Her other writing has been nominated for the coveted Edgar Award from the Mystery Writers of America, the Anthony Award presented by the Bouchercon World Mystery Convention, the Macavity Award, and the Benjamin Franklin Award from the Independent Book Publishers' Association.
A keen library supporter and public speaker, Zoë blogs regularly on her Blog page. She also witters on Twitter (@AuthorZoeSharp) and fools about on Facebook (ZoeSharpAuthor). She was formerly a long-term contributor to the acclaimed Murderati blog—alas, now defunct. She's a regular blogger at MURDER IS EVERYWHERE and also has a presence on Goodreads.
Zoë lives in the English Lake District. Her hobbies are sailing, fast cars (and faster motorbikes), target shooting, travel, films, music and reading just about anything she can get her hands on. 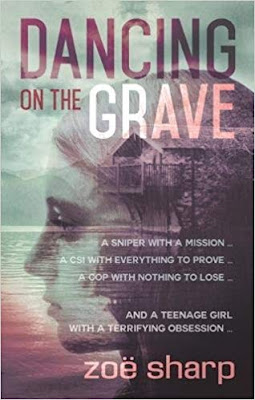 Add to your GoodReads shelf.

For newly qualified crime-scene investigator, Grace McColl, it’s both the start of a nightmare and the chance to prove herself after a mistake that cost a life.

For Detective Constable Nick Weston, recently transferred from London, it’s an opportunity to recover his nerve after a disastrous undercover operation that left him for dead.

And for a lonely, loveless teenage girl, Edith, it’s the start of a twisted fantasy—one she never dreamed might come true.

Our Review, by LITERAL ADDICTION's Scholastic Siren - Sara:
The author wrote an interesting blog the other day about where to start with reading her books because of how her characters have grown. Here’s a link if you are interested in the discussion. https://www.zoesharp.com/why-im-going-to-tell-people-not-to-read-my-books/ The reason I mention it, is because this book is the perfect place to start if Ms. Sharp is a new author to you.

DANCING ON THE GRAVE is a standalone police procedural set in the English countryside. The setting is lovely and well described but not overly done so as to be distracting. The story changes POV, and all of the characters are fully developed and interesting people. This is not a thriller in the typical action-packed way; however, I think it is billed that way because of the Charlie Fox series, which is also penned by Zoë Sharp.

The first chapter grabs you immediately, and you suddenly find yourself hooked. I have to put in a warning, however. The first murder victim is a dog that had been killing a flock of sheep. So...I guess the sheep were actually the first victims. Once the dog died, I wasn’t sure I wanted to keep reading, I am a serious animal lover! But the book is worth continuing--well worth it. The dog is treated as a serious case, and the killing is not grisly or gratuitous. On the scene, the crime scene investigator, Grace McColl, calls in a detective because the animal is owned by someone of influence. Here, we meet Detective Constable Nick Weston, new to small-town life and rife with baggage. Grace is not impressed by Nick, nor he with her. Through the course of the investigation, they become good partners, and the story unfolds beautifully.

I was given a review copy of the book early, but I also purchased a copy to keep.

DANCING ON THE GRAVE

Posted by LITERAL ADDICTION at 3:30 AM No comments: 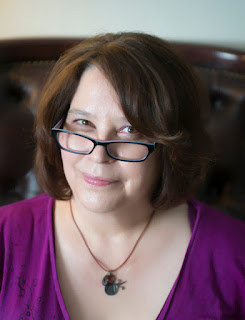 Rachel Caine is the New York Times, USA Today and Wall Street Journal bestselling author of more than fifty novels in a diverse range of genres and categories. She's been honored with multiple awards from RT Booklovers Association and the Texas Library Association, and was honored with two spots on the 2012 "Most Favorite Books of UK Schoolchildren" list.

She started writing at 14, and wrote steadily (but privately) until the age of 28, when she got her first novel deal for Stormriders(as Roxanne Longstreet). She published several horror novels under that name, and switched to romantic suspense as Roxanne Conrad. In 2003 she launched into the urban fantasy genre under the name Rachel Caine. In 2006, she created the Morganville Vampires series in young adult, and premiered the TLA-listed novel Prince of Shadows in 2015, and the new Great Library series with Ink and Bone in 2016.

In 2017, she began writing thrillers with the smash bestsellers Stillhouse Lake and Killman Creek.

Rachel also has written many short stories in a wide variety of anthologies and collections, and screenplays for both feature film and television. She wrote all scripts for the 2014 production of Morganville, a web series adaptation of her bestselling young adult series (now available streaming on Amazon Prime and Vimeo).

Rachel and her husband R. Cat Conrad live and work in Fort Worth, Texas. 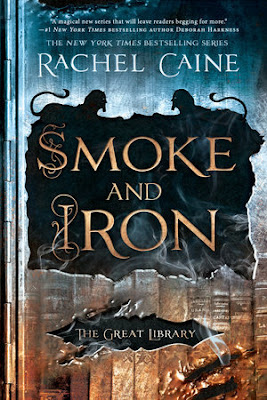 SMOKE AND IRON
The Great Library #4

To save the Great Library, the unforgettable characters from Ink and Bone, Paper and Fire, and Ash and Quill put themselves in danger in the next thrilling adventure in the New York Times bestselling series.


The opening moves of a deadly game have begun. Jess Brightwell has put himself in direct peril, with only his wits and skill to aid him in a game of cat and mouse with the Archivist Magister of the Great Library. With the world catching fire, and words printed on paper the spark that lights rebellion, it falls to smugglers, thieves, and scholars to save a library thousands of years in the making...if they can stay alive long enough to outwit their enemies.

SMOKE AND IRON starts right where we left off with ASH AND QUILL and the rest of the Great Library series.

Because the group is scattered, we get different POV chapters in this book, but the author pulls it off beautifully. While I am not always a fan of this storytelling method, it seems necessary for all the moving pieces here and was wonderfully done.

The plotting is exquisite and gets better with each new entry to the series. The characters have grown and changed as the series progresses, and they feel like real people. Each book is like a novel-length chapter to the overall arc. You want to start at the beginning [and we suggest you do!], but you will never want them to end.

I think this idea started as a five-book series, but I’m hoping for many more.

Posted by LITERAL ADDICTION at 4:09 AM No comments: