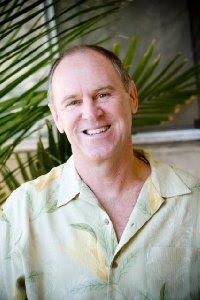 Scott Prussing was born in New Jersey, but was smart enough to move to beautiful San Diego as soon as he received his Master's degree in psychology from Yale University.
In addition to writing, Scott enjoys hiking, riding his bicycle near the beach, and golf. 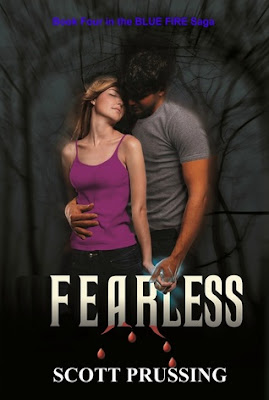 is the fourth book in the paranormal romance series The Blue Fire Saga. Books one, two and three are Breathless, Deathless and Helpless.

Fearless continues the story of college freshman Leesa Nyland and her supernatural vampire hunter boyfriend Rave. After rescuing her brother from the clutches of in Breathless, Leesa was hoping to return to her normal, boring life. Trying to figure out how to kiss Rave without his magical fire burning her to a crisp is all the adventure she wants. But in addition to hungry vampires, there are evil wizards and a Necromancer who must be stopped, and it turns out Leesa may be the key to defeating them. Now if she can just stay alive long enough to learn how to control some special powers she never knew she possessed, and if the dead will just stay dead…

Fearless is filled with the same passion, suspense, supernatural danger and warm humor that readers loved in the first three Blue Fire Saga books. Don’t miss out on this next installment of this fun, fast-paced adventure.

It was so nice to once again be immersed in the wonderful world that is the Blue Fire Saga! I had forgotten just how wonderful these books are, and how much I adore this cast.

After the happenings of the first three books, Fearless picks up where things left off and begins immediately with the introduction of a new character who will immediately have you wondering which side he or she is on--something I adore in my paranormal reads.

With a powerful necromancer wreaking havoc on their small town, and the dark hell-bent on revenge and destruction, all the groups have to take a stand in their own way and join forces when necessary to battle the evil, even as Leesa continues to discover herself and what she's capable of. Add to that, the fact that there is a primal magic in and around Leesa's and Rave's home, and you get a sexy, action-packed thrill ride of a novel with characters you can't help but root for. I adored the first three books of this series, but this may be my favorite one yet.

Highly recommended. The next books can't come out in audio soon enough so I can continue the journey.

Posted by LITERAL ADDICTION at 5:44 AM No comments: