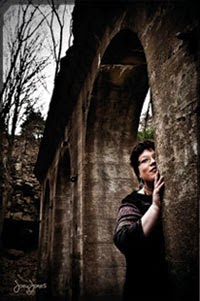 Jamie Kleinkauf-Schmidt has over thirty short stories published in small press and ezines. She holds a Bachelor of Arts Degree from the State University of New York at New Paltz in Secondary Education English, which is a fancy way of saying she went to college to teach high school English. When that didn’t pan out, she worked as a call center manager, a Tupperware consultant, a paralegal, and finally a technical writer for a major conglomerate company. She is an active member in the Romance Writers of America (RWA), serving as the PRO liaison for her local chapter Connecticut Romance Writers of America (CTRWA).

When not writing, Jamie relaxes with a mug of hot tea and knits or makes beaded jewelry. She sells her handcrafted items at The Dudley Farm during the summer. A voracious reader, Jamie has a Kindle and is not afraid to use it. 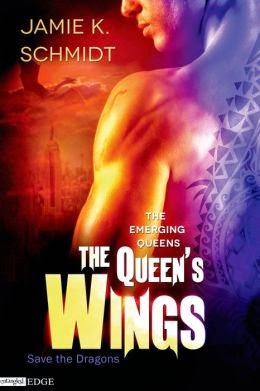 Long ago, the Cult of Humanity sacrificed the Dragon Queen, crippling the breeding process. But now Carolyn hears the voice of that long dead queen telling her that she holds the key to breaking the spell that will free all the female dragons.

FBI dragon Reed's disdain for humans can't mask the magnetic attraction he has for Carolyn, but when she tells him she's going to shift into a dragon he thinks she's crazy. A female hasn't been hatched, or shape shifted, in over a thousand years.

He's proven wrong after Carolyn shifts and is named the new Queen on the block. A never-ending line of suitors forms, but she only wants Reed. Too bad he doesn't want in on the competition. But when the Cult kidnaps Carolyn to sacrifice her in an effort to make the curse against the female dragons permanent, Reed must face his fears—and feelings, racing to save the woman he realizes he can't live without.

Our Review, by LITERAL ADDICTION's Pack Alpha - Chelle:
*Copy gifted in exchange for an honest review

This book was really greatI I love when a review book becomes a new obsession... I honestly couldn't put it down and it was exactly what I needed.

Jamie K. Schmidt is a new author for me. When I got an email about Entangled's new May releases and noticed this one on the list I decided to request it for review and see what would happen. I was long overdue for a good dragon shifter book and decided it couldn't hurt to support a new author. I didn't expect to read it in one long sitting with a smile on my face almost the entire time.

The Queen's Wings, the first of a new Paranormal Romance series THE EMERGING QUEENS, was witty, full of fun pop culture references, magic, mayhem, romance and was, in a word, just FUN!

Ms. Schmidt has a knack for plucky female leads. Carolyn draws you in from page one with her no-filter tendency to think aloud and say largely inappropriate things at the most inappropriate times. Most people thinks she's completely nuts, but aside from her being an emerging dragon Queen, she's really just like the rest of us - a book addict with an internal goofball. She was instantly likable and relatable.

Reed is one of those alpha males that you just want to smack upside the head. He's hot, sexy, sometimes standoffish, and yet has this romantic edge that shows through in the subtlest of ways and yet he's just... aaarrrgh. He's a bit stuffy, tries to stick to the "ways of the people", and yet it was really fun to see Carolyn exasperate and challenge him and have him capitulate. I will admit that I actually wanted her with Jack (he was the easier of the two choices), but was glad that while there were multiple (somewhat) love interests, it wasn't a love triangle and that things turned out the way that they did. They really are the perfect match.

The world building was both what we've grown to know and love in dragon shifter paranormal romance, but also new, unique and exciting. There were multiple types of dragon shifters in The Queen's Wings, and having the matriarchal structured society was very cool. It reinforced the fact that strong females would be prevalent throughout the EMERGING QUEENS series.

I LOVED the little twist at the end and I think that all book addicts will appreciate with Ms. Schmidt did with Carolyn's HEA!

I would definitely recommend this book for all paranormal romance fans that like dragon shifters, and even those who think they might want to try some. I also highly recommend it to readers who appreciate a light-hearted read with a strong, yet goofy female lead.

Posted by LITERAL ADDICTION at 1:40 PM