New York Times and USA Today bestselling paranormal and romantic suspense author Caridad Pineiro wrote her first novel in the fifth grade when her teacher assigned a project – to write a book for a class lending library. Bitten by the writing bug, Caridad continued with her passion for the written word through high school, college and law school. In 1999, Caridad’s first novel was released and over a decade later, Caridad is the author of over thirty-five published novels and novellas. When not writing, Caridad is an attorney, wife and mother to an aspiring writer and fashionista. 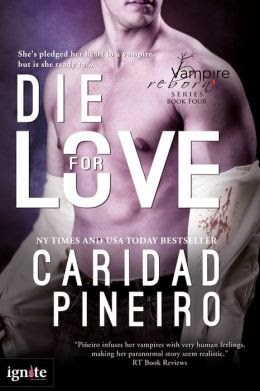 Die For Love
THE REBORN Book #4

Loving a dead man can be brutal. Diana Reye’s pregnancy is draining her of life. Now she and vampire Ryder Latimer are faced with the most difficult choice of all. Turn Diana, or lose her and the baby. If Ryder chooses to save them, he risks the wrath of the Slayer Council and will be marked for his own death by their friend Michaela. Chasing a vampire can be consuming.

FBI agent Michaela Ramirez has been searching for the vampire who raped and killed her mother while acting as an enforcer for the Slayer Council. Since meeting FBI Director Jesus Hernandez , however, Michaela is losing a bit of her edge as she imagines the possibility of a life full of happiness and passion with her handsome boss by her side…and in her bed.

Living without the one they love isn’t an option.

But soon trouble comes calling as the vampire she hunts makes Michaela his prey. Now Michaela finds herself in a battle not only for her own life, but for her friends lives as well, as she and Ryder both make the difficult decision to break all the rules for love.

First up, I have to say that I'm a bit confused as this series comes under different names so I guess that maybe it's being republished? I realise that this sometimes happens when authors change publishers or revert to self publishing but I'm not sure if I should call this Vampire Reborn or The Calling or even The Ignite series! Whichever title you know it by it's fabulous paranormal fun! These books are all loosely connected and feature Supernaturals and in particular vampires! Add in more than a dash of the FBI and a whole lot of steamy romance and these books are bound to appeal to appreciative readers everywhere.


This is a mixture really of two very powerful story lines. The first one catches up with Diana who whilst working as an agent for the FBI became contaminated with vampire blood . The fact that she loves the vampire Ryder whose blood she now carries doesn't help! Forced to watch the one woman he loves gradually succumb to illness and possible death Ryder can never forgive himself. They have tried everything to keep Diana alive and human but her health is deteriorating at a rapid rate and now to truly fuel the damage Diana is carrying their unborn child! At a time when they should be rejoicing all they can really do a pray for a miracle as no amount of drugs or transfusions help and Diana's life starts to drain away.In spite of Diana's own tragic circumstances she still wants to help her old friend and colleague Jesus who is in love with the Dhamphir Michaela . Conceived when her mother was raped by a vampire Michaela is a slayer without equal but her fellow slayers have always reviled her for her mixed blood. All her life all Michaela has dreamed about is finding and killing the vampire Connall who so cruelly ended her mothers life. Now she unexpectedly finds herself being targeted by both him and those he has sired. Michaela is not one to run away but she's under attack from all sides as even her fellow slayers seem set on her destruction.

Michaela has tried to never become involved and yet here she is surrounded by those she now considers friends. Ryder refuses to give up on Diana and wants to fully convert her to vampire but if he does that Michaela is honour bound as a slayer to fulfil her duty. As for Connall he is out to trap Michaela and will kill anyone in his way!

In many ways this must be the book that fans of this author have been waiting for. It's a story that has just ran and captured the imagination of Ms Pineiros readers. The genuine love between Ryder and Diana had been left as a cliffhanger in the previous book as her health took a turn for the worse and harsh choices would have to be made. In this book we see the raw anguish and emotion that threatens to tear the couple apart and yet Michaela's storyline slots in seamlessly . It's a very clever author that can write two stories and yet make them flow as one.

Posted by LITERAL ADDICTION at 7:25 AM