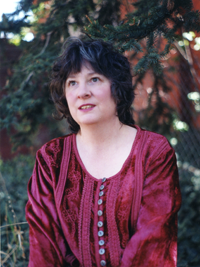 RITA® Award Winning novelist Robin D. Owens credits the telepathic cat with attitude in selling her first futuristic/fantasy romance, HeartMate, published in December 2001. Since then she has written thirteen books in the series, Heart Fortune the latest in August, 2011.

Her five book Luna series included average American women Summoned into another dimension to save a world. Her Mystic Circle series is a mixture of contemporary urban and romantic fantasy set in Denver.

And her newest stories, about an uptight accountant who sees Old West ghosts and helps them move on, will start with Ghost Seer in April of 2014. She is profoundly thankful to be recipient of the 2004 Rocky Mountain Fiction Writers’ Writer of the Year award as well as the 2011 Writer of the Year Award, the Colorado Romance Writers Lifetime Achievement Award and the 2010 Best Paranormal and Best of the Best Daphne Du Maurier Award…actually, after winning an award she tends to dance around bored cats. 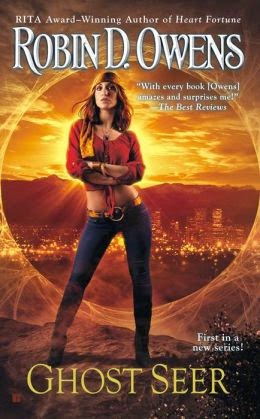 There’s just something about Clare. Apart from the ghosts…

When her eccentric aunt passes away, no-nonsense accountant Clare Cermac inherits more than just a small fortune. She receives the gift of communicating with ghosts. While Clare may not believe in spirits, it’s hard to overlook the shadowy talking dog appearing on her bed or spectral cowboys tipping their hats to her in the streets of Denver. And when she locks eyes with sexy—and living—Zach Slade, there’s certainly no ignoring him either.

A former deputy sheriff, Zach is leaving a painful past behind in Montana for a new life in Denver as a private investigator, a job that has him crossing paths with beautiful Clare. Not that she minds. After the restless ghost of a Wild West gunman demands her assistance, Clare finds herself needing Zach more and more—and not just for help.

Our Review, by LITERAL ADDICTION's Alluring Angel - Kathy:
*Copy gifted in exchange for an honest review

Ghost Seer by Robin D. Owens is the first in a new series that features Claire Cermak and Zack Slade, two people who find the life that they have each known, suddenly and drastically changed. Claire is a no nonsense accountant who likes things straight forward and orderly. But on the death of her kooky aunt, she begins to question her sanity, as she begins to see and hear ghosts. And since she doesn’t believe in ghosts, this is quite a problem. Zack has dedicated his life to law enforcement until he is shot. No longer able to work in the field, and not interested in spending the rest of his career behind a desk, he finds himself bitter and rudderless.

Ghost Seer is a nice mix of romance, paranormal and a dash of mystery. Enzo, the talking ghost dog that Claire inherits along with the the ability to see ghosts, is a wonderful addition. Part goofball, part advisor, Enzo tells Claire that she must accept her new power or risk going mad and even dying. Zack, also a nonbeliever, refuses to acknowledge his own touch of sight.

Ghost Seer is an easy read. Slow at times, but enjoyable overall.

Posted by LITERAL ADDICTION at 6:16 AM