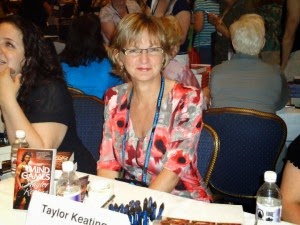 I’d like to be able to say I always wanted to be a writer, but the truth is I thought it looked like a lot of hard work. Life, however, sometimes leads us down paths we never intended to take.

From the very beginning, my parents encouraged my love of books. When a Grade One teacher suggested I wrote too many “thrillers,” my mother, an English teacher, said I could write – and read – whatever I wanted. My high school English teachers later backed her up on that. In university, I received a Bachelor of Arts degree in Social Anthropology. At the time it was a whim, but it’s amazing how much that little piece of paper has benefited me over the years.Researching the history of civilizations has led to many intriguing worldbuilding possibilities.

When my children were babies and money was tight, my mother, grandmother, and husband bought me an electric typewriter for my birthday because they knew I was bored and wanted me to be happy. My mother became my very first critique partner, willingly reading pages and pages of manuscripts no one should ever have to suffer through. She researched markets for me, and introduced me to a journalist friend, who in turn introduced me to the Writers Federation of Nova Scotia. My brother and my brother-in-law introduced me to Thieves’ World, David Eddings, and Piers Anthony. Mysister gave me my first computer.

My grandmothers believed if something’s too hard, you aren’t working hard enough. My brother and sisters have all successfully followed their dreams, and my husband and two sons offer me proof every day that hard work is something to be embraced, not avoided. With these people behind me, how could I possibly stray from a path on which life seems to have planted them as guardrails? 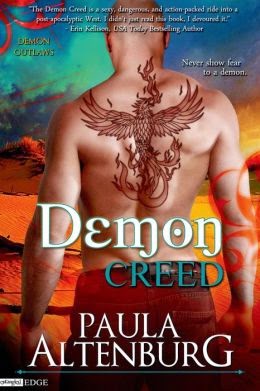 As a highly skilled assassin, Creed is used to being called upon by the Godseekers for help. But in a world just recently rid of demons, the task to now track down half-demons isn't as easy as it seems. Not only is Creed himself a secret half-demon now going against his own kin, but when he discovers numerous innocent children are being kidnapped in the mountains, he second guesses his mission. Justice should be for all, not just for demon spawn. Living in a world of cruel men, Nieve has no memory of her life before her enslavement. But when Creed comes around asking questions about missing children, the memories of her half-demon son - and the demon who tricked her - come flooding back. Now, Nieve will do anything to get her son back...even if it means putting her trust in Creed. Together they set out to find the Demon Slayer who can help them. Little do they know the demon who fathered Nieve's son is also searching for Nieve, and he's teamed up with the kidnapper to draw her out. Creed and Nieve must race against the clock to save the children, their hearts, and the world.


Our Review, by LITERAL ADDICTION's Vivacious Valkyrie - Marta:
*Copy gifted in exchange for an honest review

Well, this is apparently the last installment of the Demon Outlaws series, and I for one will be sad to finish reading about these brave characters who live in such a dangerous and twisted world. If someone had told me that I'd be reading an almost dystopian romance that featured demon hunting cowboys I would have just laughed, but this author has surpassed all expectations with these books. Incredible world building and now with this installment, it almost feels as if we have come full circle. A hero unlike any other and a chance to catch up with characters who captured my interest in the vey first book.

In the not so distant future, the world as we know it will topple and be overran by demons. Civilization will crumble and technology will be no more. Out of those ashes will rise a new way of life with god fearing people following goddesses and praying for the demons to be banished. One will be born with the power to help beat the demons back to their own dimension but disillusioned mortals will always fear that one day the demons will find a way back.

Creed is a demon hunting Assassin working for the god seekers and a recent spate of missing children brings him away from his usual haunts and further into the mountains. It's believed that the children that have disappeared are half demon and known as the despised Spawn, demonic hybrids with ungodly powers and the ability to call back the full blood demons. Creed is determined to find the truth and travels to a ranch where he's heard of a child being sold to slavers. What he finds there is Nieve, a woman whose very essence calls to him but she's cruelly mistreated and it's her child that might hold clues to what's happening. Creed saves her life and promises to help if he can but the journey they take is not an easy one. Nieve has been abused by both mortal and demon alike and doesn't trust easily but as they are thrown together Nieve faces her biggest fear, a demon! This demon is no child though as the demon is Creed! Creed has spent his life hiding in plain sight and now he will have no choice but to show his inner beast!

Creed is unlike any other paranormal hero I have ever read about! He's quite literally a man on a mission and he's not giving up no matter what the cost. As the son of a demon he can manipulate peoples minds and has always managed to live amongst the mortals undetected but fooling Nieve is not easy to do! I loved Creed! He's a sworn protector of innocents and thinks that everyone deserves a chance . Heritage, colour or abilities none of that matters to him. What he cares about is ensuring that everyone gets a fair hearing and the possibility of a future.

Nieve lives in a world were women are nothing more than chattels and it's a truly abysmal life that is forced upon her. She has been betrayed by everyone she cares about and yet is not totally broken. Her fervent desire to be reunited with her missing son drives her on but it's an inhospitable reality for women and she needs Creeds protection. Luckily Creed is not just the most affable Assassin you could ever imagine ( people always trust and like him due to his powers) but he's also total eye candy! Nieve is many things but she's not brain dead and as a female only too aware of Creeds latent sexuality . Don't expect lots of explicit scenes though as this story is completely plot driven and the relationship they form is only part of it.
It was wonderful to meet characters from the first book again and it felt as if old friends had returned . These are reluctant heroes who are just doing what they see as right in such an inhospitable environment. The authors words conjure up images of old westerns and to say it has a feel of the old west is probably the best description I can come up with! The world building is truly astounding and as the story progresses we see glimpses of what went before which made it for this reader very perturbing and quite believable . A disturbing alternate reality that has completely captured my imagination.

As I mentioned, this seems to be the last in this series and maybe Ms Altenburg saved the best for last! Creed is a character who never expects to find love but the future is not set and there's hope for everyone. I will miss these characters and can only hope that whatever the author has up her sleeve next will be just as enthralling!

Posted by LITERAL ADDICTION at 4:54 AM