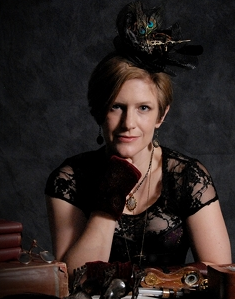 Delphine Dryden majored in English at the University of Texas at Austin, and probably should have gone ahead and gone for that MFA and PhD to become an english professor like she planned. Instead, she took a detour through law school, practiced law for a woefully brief time, and wound up working in special education for the next fifteen or so years (first as a teacher, then as an educational diagnostician). Somewhere in there, she also obtained a Master’s in Educational Psychology/Special Education.

In 2010, Delphine gave up the day job to write full time. Now she balances that with parenting two kids and two dogs, and occasionally designing web sites or making trailer videos. She and her family are all Texas natives, and reside in unapologetic suburban bliss near Houston.You can keep up with Delphine online at her Website, on Facebook, on Twitter, and on GoodReads. 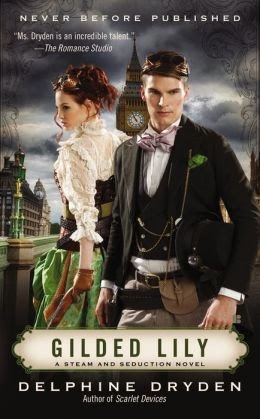 Frederique Murcheson’s introduction into society hasn’t gone smoothly—some would even call it a disaster. Only Freddie considers her debut a success. Her scheme to become a makesmith has gone off flawlessly. The only thing that could upset her plans now would be if someone discovered that brilliant tinker Fred Merchant is, in fact, a lady in disguise.

Wooing a spoiled heiress is not exactly Barnabas Smith-Grenville’s idea of high espionage. However, considering his brother disappeared on the job, supposedly into the most iniquitous of opium dens, he cannot expect much better. At least the assignment will afford him time to search for his brother, whom he suspects is in spy-related trouble rather than a drug-addled haze.

But when Freddie proves to be both irresistible and the key to the answers he seeks, Barnabas finds himself not only entwined in a scandalous mystery involving lethal submersibles and deranged dirigibles, but also in a dangerous game of the heart…

This is book three in the Steam and Seduction series, which is set within a steampunk type era. A landscape that resembles the Victorian, but feels quite twentieth century at times. A world where steam is the ultimate power, is closely guarded, but anything is possible . This is an alternative reality without the nuclear power or the technology we take for granted, and more importantly, a life that's set with rigid rules. Welcome to a new age of human imagination!

Having read Scarlet Devises I was very curious to see who the author would write about next and was quite surprised when this story turned out to feature Barnabas Smith- Grenville whose brother Phineas was previously mentioned. Barnabas wants nothing more than to serve his country and find out what really happened to his missing brother. Rumours abound that Phineas was heavily involved with opium but Barnabas wants so much to discover the truth about his baby brother. When asked to maintain a watchful eye on a wealthy young heiress whose father is heavily involved in political machinations it seems the answer to his prayers. Keeping tabs on Frederique Murcheson in the last place his brother Phineas was seen is the perfect assignment for Barnabas. He knows his brother served his country well and now he's determined to do the same but espionage doesn't suit everyone!

Freddie is a talented young woman who just feels so stifled by all the rigmaroles of society. As a young woman of considerable talents and ingenuity she's found a way to spend her days more profitably. Freddie sneaks out dressed as a young man and works as a Tinker, a man who fixes all manner of machinery and yes she's good at it! The only problem though is her father has yet again placed a watchdog in her life and his name is Barnabas ! He seems harmless enough and Freddie has no compunction about directing him to help further her own endeavours but when they both stumble across something that puts them all in danger suddenly Freddie sees a whole new side to Barnabas and boy does she like it!

These novels are set in an alternative steampunk world that imagines what life could be like if the American revolutionary war had never taken place and are just full of political intrigue and conspiracy usually. This particular story, however, featured a lot more about the corruption and greed that fuels the underbelly of society. Opium dens may seem fanciful, but are a part of this reality and smuggling is a highly lucrative and dangerous business. The author cleverly interweaves modern ideas such as the possibility of an underwater tunnel connecting the English Coast with mainland France whilst adding amazing and bizarre creatures to the mix. Fear not though if it's the technology that always hold you gripped as submersibles and dirigibles abound in this story, but this time it's the underwater world of possibilities that firmly take center stage.

I always enjoy the mystery of these stories, but obviously also seek to be entertained by the romance and this time I was a little disappointed if I'm honest. Freddie is a plucky heroin,e but I thought she took advantage of those who trusted her and I didn't always like that about her. Barnabas is not the usual chest beating alpha male that so many authors seem to prefer. He was a more reserved type of chap, and I hate to say sensitive but he certainly felt a little weaker at times then I wanted. I have no doubt that the two central characters enjoyed their "games" but it just felt as if Freddie was always in charge and for me that took some of the thrill out of the romance. He certainly deserves to get his girl but I'm still not sure if Freddie deserved him! She's a loyal friend and as the story unfolds clearly sees all the good that is Barnabas but for this reader it wasn't my favorite pairing .

I'm not particularly a geek or anything, but I do enjoy reading about all the inventions in these books. Add a large dose of political intrigue and mystery and these stories are addictive. A fast paced, fun, and truly fascinating world that's filled with entertaining characters . These books are pure escapism and Gilded Lily was no exception!

Posted by LITERAL ADDICTION at 6:03 AM