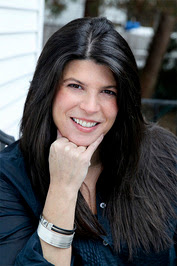 Stephanie Tyler is a bestselling writer of over 20 amazing titles. We say “writer” and not author because that is what she calls herself. Some may think that’s strange, but we get it. It’s the part she loves, it’s what she does, and therefore makes her what she is. She says she was born a writer, that she always knew it’s what she wanted to do, and took every step necessary to make it happen. She double majored in English Lit and Creative Writing, went back to get her Masters in English Lit and Secondary English Education, and even went so far as to get ½ of her PhD. She worked as a manager in a book store while going to school, and ended up teaching both at the middle school and college level afterward until family took precedence. Once that happened, she was able to really start writing, no longer having to split her creative focus between her students and herself, and she hasn’t stopped since.

It took Stephanie four years and 10 manuscripts before she got her first sales call, but after that, things happened fast and furiously. Within the span of a year, she was offered contracts for 11 books and just three years later hit the New York Times Best Seller list with “Hold on Tight”.

Defiance, Book #1 of the DEFIANCE series
by Stephanie Tyler

Synopsis:
Rebelling against her legacy as the MC's princess, Tru Tennyson escaped the ruthless, male-dominated culture of the Defiance motorcycle club. Three years later, her newfound freedom is ripped away, thanks to a massive hybrid storm that killed millions. Now, in the post-Chaos world of semi-darkness and near-total anarchy where gangs rule, she discovers the dangerous world of Defiance may be the one thing that can keep her safe.

Tru is at the MC's mercy when she's dragged back to her former home … and to the only man she's ever pictured a future with. Caspar is the bastard son of the club's leader, her safe haven when life got rough — and her onetime lover the night she left. When Tru refuses to trade sex for power and be claimed by a rival club leader, she also dares to announce she wants Caspar instead, throwing the MC into turmoil.

Tru's brazen revolt could start a gang war and destroy the club from within. Now both Tru and the MC must wait for Caspar's response … and the inevitable fallout.

Our Review, by LITERAL ADDICTION'S Pack Alpha - Michelle L. Olson:
*eARC provided by the Author in exchange for an honest review

Defiance is set in a dystopian world where natural disasters have wiped out most of the natural land mass and forced people to find ways to survive. Motorcycle Clubs (MC) have taken ownership of the main surviving territories and their primary money makers, and are functioning as governing bodies and rivals. Like current & known biker gang lifestyles, it's 'members' and 'by invite' only, and definitely rough around the edges.

Our hero, Caspar, is a member of the Defiance MC - the current Enforcer actually - and son to the President. He's also a known playboy and assumed slacker, but there is SO much more to him than meets the eye...

Tru, our heroine, was a member of Defiance growing up. Daughter to the Enforcer at the time, she survived a wickedly abusive childhood and took the first opportunity that presented itself to get out of the life. Unfortunately, life PC (post-Chaos) doesn't lend well to being on one's own, and she's forced back into the MC in order to survive.

Tru showing back up in Defiance causes all sorts of problems - there are debts to rival MCs that must be paid, assumed slights that must be smoothed over, she's viewed as an outsider because she left, yet still perceived as the Princess that she was born... And then there's her relationship with Caspar, it's nothing if not complicated. She has always known she was meant for him, yet they only shared one passionate night together - the night that he left for the military and she struck out on her own - and while things were complicated then within the MC, they're even more complicated now.

Thing of note: Defiance is classified as New Adult. I honestly wouldn't shackle it that way. Simply put, it was a dark, sexy, surprising, wonderfully fresh, and enjoyable read! Some kudos...
In short, I give Defiance 4 1/2 Skulls and would definitely recommend it! To whom you ask? Well... anyone, but especially Dystopian fans, Romantic Suspense Readers, and Urban Fantasy and Paranormal Romance groupies because it had a very 'Shifter' feel for me even though it was completely non-supernatural. This is definitely something fresh to check out! 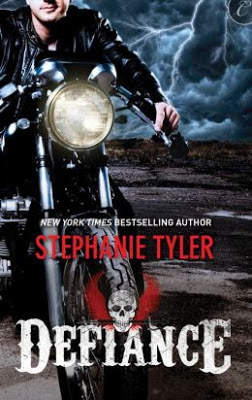 Posted by LITERAL ADDICTION at 1:52 PM